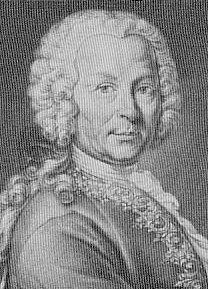 The only known (to us) portrait of Johan Agrell, an engraving by V. D. Preisler after a painting by J. J. Preisler, Nuremberg 1754. Detail.

Johan Agrell (1701–1765) was born in the Swedish province of Östergötland and studied music in Uppsala. Most of his professional career, however, was spent in Germany. He was recruited from Sweden to Kassel as a member of the royal orchestra, where he became famous as a virtuoso on both harpsichord and violin. In 1746 he moved to Nuremberg as the city’s director of music, which he remained until his death in 1765. He married Margaretha Förtsch in 1749 and had a daughter Ursula Barbara, who died in childbirth just like her mother [MS vol. 1, p. 67]. We do not know if he had any surviving grandchildren.

Although Johan Agrell was an appreciated musician and conductor, it is as composer he is remembered today. His music belongs to the very last part of the baroque era, in some details looking ahead into the Viennese classical school. He wrote concertos, sonatas, and various types of occasional celebration and church music. Valentin claims, citing Lindgren, that he was the originator of the “fully developed sonata form” [Valentin].

Unfortunately, much of Johan Agrell's work has been lost, and of what is preserved, only copies are known, not a single autograph [MS, vol. 1, p. 105; vol. 2, p. 7]. It was believed that all Agrell’s church music [Eppstein] and all his vocal music [Prophone] has been lost, but this is fortunately not entirely correct. Thanks to Morgenroth Sheerin [MS, vol. 2, pp. 5, 25] and W. Riedelbauch and R. Freund [personal communication], we now know that a library in Göttingen holds two manuscripts that contain a total of 17 motets by Johan Agrell (see library record listed below).

Interestingly, Johan Agrell was among the first composers who wrote symphonies. According to different sources, he composed at least 22 [Lindfors], at least 28 [MS], or at least 32 [Heussner and Bengtsson] symphonies. Exactly when he wrote his first symphony remains somewhat obscure. Valentin claims that he composed his six symphonies opus 1 already in 1725 [Valentin], which was considerably before composers such as Sammartini and Stamitz, who are also known for early symphonies. Valentin concludes, citing Brenet, who in turn cites Fink, that “the oldes symphonies for full orchestra were those, which the Swedish composer Johan Agrell composed in 1725”. Another encyclopedia article [Heussner and Bengtsson] dates Agrell’s orchestra symphonies to the 1720s–1740s.

However, the above-mentioned datings of Agrell’s first symphonies to the 1720s are questioned by the main authority on the works of Johan Agrell, namely Jeannette Morgenroth Sheerin: “Although Fink exaggerated Agrell's claim to precedence, even a more reasonable approach to chronology places Agrell securely in the first generation of Classic symphonists” [MS, vol. 2, pp. 23–24]. According to her, the earliest certain dating is January 7, 1738, when Vivaldi conducted one of Agrell’s symphonies [MS, vol. 1, ch. 7], and his symphonies opus 1 cannot with certainty be dated before 1746 or 1747 [MS, vol. 1, ch. 3, 7].

Johan Agrell and his brother Jonas were the first persons named Agrell in our family.